Legal practitioners and rights activists have faulted a speech by President Muhammadu Buhari where he stated that national interest should have preeminence over the rule of law.
“Where national security and public interest are threatened or there is a likelihood of their being threatened, the individual rights of those allegedly responsible must take second place, in favour of the greater good of society,” Buhari said in Abuja on Sunday, while opening the 59th annual general conference of the Nigeria Bar Association (NBA).

But human rights lawyer, Ebun-Olu Adegboruwa, described the speech as a setback for democracy and national development.

In a speech at the ongoing conference, he said national security has neither definition nor limit. “It is amorphous and panders to individual discretion.

It is the rule of the executive arm of government alone, being the one responsible for policy implementation and the determination of security imperatives.

“It is the rule and decision of individuals such as the inspector-general of police or the commander-in-chief.

Such rules are always subject to manifest abuses, especially in respect of opposition politics. That has been the experience in Nigeria.

On the other hand, the rule of law is defined, basic, predictable and even subject to review. It helps to predict and govern human conduct.”

He added: “Whereas we all support the president in the fight against corruption and terrorism, it is still necessary to allow the rule of law to have the pride of place in all spheres of governance.

It was under national security, for instance, that I was kept in custody from November 2007 till July 2008, without trial at all.”

A Senior Advocate of Nigeria (SAN), Prof. Epiphany Azinge, said: “The rule of law cannot be subject to national interest.

It is rather predicated on the supremacy of law. There is no other norm or authority higher than the rule of law.”

Also, Sebastian Hon (SAN) said: “Those who say the judiciary is the last hope of the common man are not far from the truth.

Anything less than this will amount to taking a leap into the bottomless and eternally regrettable abyss of dictatorship.”

Stressing that the rule of law is supreme, a former secretary general of the NBA, Nimi Walson-Jack, said: “That is why even when you declare a state of emergency in a state, which is a component part of the federation, you must go to the National Assembly for its ratification because it involves the suspension of rights in the constitution. If the National Assembly says no, you cannot have a state of emergency.”

Another legal luminary, Ledum Mitee, argued: “The rule of law is also the protection of national security because you are protecting the nationals.

The nation is not just a geographical entity; it is the people that live in the nation that make it a nation.

In fact, the rule of law itself should be an element of national security.”

Rights activist, Ifeanyi Okonkwo, said: “The president did not write that speech. A very ignorant person who wanted to please him did.

The rule of law cannot take the back seat. The president is turning the law upside down.

The rule of law is paramount in democracy. It determines what national security is.”

According to Col. Tony Nyiam (rtd), a delegate at the 2014 national conference, Buhari’s statement, coming few months to a general election, could indicate he (Buhari) is not counting on a free and fair process to win the polls.

It was unexpected of a democratically elected president to make such a tyrannical statement, he said.

The Spokesman for the Yoruba socio-cultural group, Afenifere, Yinka Odumakin, on his part, said the speech is a wake-up call to Nigerians to rise against tyranny.

“Nigeria’s national interest is stipulated and guaranteed in the rule of law.

But from Mr. President’s statement, it appears national interest is subject to his whimsical interpretation. Nigerians need to be careful.

The statement is enough to determine where we should direct our votes in the next general election, otherwise the country would be subjected to full-blown dictatorship,” he said.

In the same vein, the national president of Arewa Youth Consultative Forum (AYCF), Alhaji Yerima Shetima, explained: “National interest itself is built on the rule of law.

Therefore, if the structure now overrides its foundation, definitely there would be crisis.

What President Buhari said was a direct invitation to anarchy. Nigerians never voted him in to undermine rule of law.”

For Dr. Kunle Olajide, the secretary general of the Yoruba Council of Elders, Buhari must understand the fact that nothing takes precedence over the rule of law under a democratic government, “not even national interest.”

In a statement, yesterday, the opposition Peoples Democratic Party (PDP) said: “It is instructive to note that contrary to claims by Mr. President, there is no pronouncement by the Supreme Court that subjugates constitutional rule of law and rights of citizens to the whims, caprices and dictatorial impulses of any president.”

It claimed: “President Buhari is apprehensive of the electoral defeat that awaits him in February 2019 for which he is seeking ways to subvert the system.

But we caution that in this desperation to hold on to power, he must not seek to again subvert our constitutional order, as he will be firmly resisted by Nigerians.”

A legal practitioner, Mudi Erhenede, however, said the president was in order.

“It’s like that all over the world. Where it has to do with national interest and security, the public good should override individual interest.”

Also, a former minister of information and legal practitioner, Tony Momoh, noted that the argument depends on the interpretation of what Buhari meant by national interest.

He said: “I must emphasise the fact that it is not the judiciary that determines what national interest is but the media. It depends on how we interpret what the president was trying to say.”

Tue Aug 28 , 2018
A gubernatorial aspirant of the People’s Democratic Party (PDP) in Oyo State, Seyi Makinde has criticised the recent actions of Governor Abiola Ajimobi, the State governor in the Fresh FM saga. Makinde said Ajimobi acts with impunity and treats Oyo State as his personal empire instead of serving the people […] 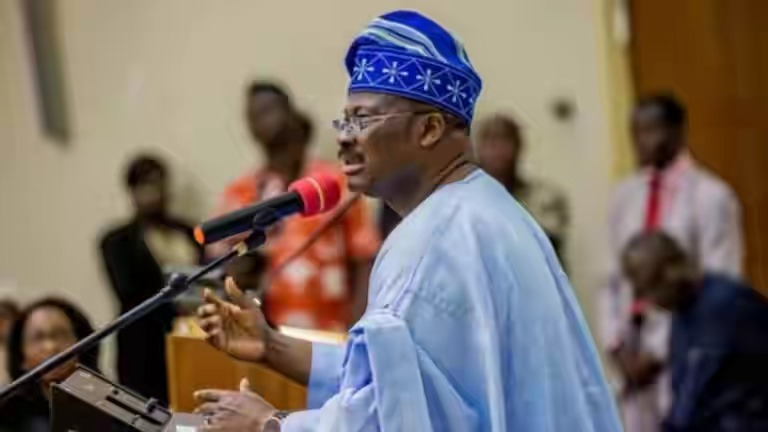