The announcement by INEC chairman, Mahmood Yakubu, at the commission’s headquarters in Abuja came hours before Nigerians were slated to head to the polling units.

The announcement was made at about 2:30 a.m. Saturday.

It came hours after PREMIUM TIMES reported that logistics challenges in some parts of the country may force the commission to move the elections.

The new dates for the elections are February 23 for presidential and national assembly elections and March 9 for governorship and state assemblies elections.

Mr Yakubu said further details of the postponement would be disclosed at a conference scheduled for 2:00 p.m. Saturday.

The statement read by the INEC Chairman:

“The Independent National Electoral Commission met on Friday, 15 February 2019 and reviewed its preparation for the 2019 general elections scheduled for Saturday, February 16, and Saturday, March 2.

“Following a careful review of the implementation of its logistics and operational plans and its determination to conduct free, fair and credible elections, the commission came to the conclusion that proceeding with the election as scheduled is no longer feasible.

“This will afford the Commission the opportunity to address identified challenges in order to maintain the quality of our elections. This was a difficult decision for the commission to take but necessary for the successful delivery of elections and consolidation of our democracy.

“The Commission will meet with key stakeholders to update them on this development at 2 P.M at the Abuja International Conference Centre.”

Some of the states where INEC’s logistic challenges occur are Niger and Ekiti.

PREMIUM TIMES published a reportby the News Agency of Nigeria where the Resident Electoral Commissioner in Niger State said ballot papers for two of the state’s three senatorial districts were missing as of Friday evening.

In Ekiti, the former governor of the state, Ayo Fayose, accused INEC of deliberately hoarding materials for the presidential, Senate and House of Representatives elections in some states to frustrate the PDP.

Mr Fayose said he was aware that ballot papers and result sheets for presidential and senatorial elections were not in Ekiti State as at 9 p.m. on Friday, adding that only materials for the House of Representatives were distributed.

Sat Feb 16 , 2019
The national chairman of the Peoples Democratic Party (PDP), Uche Secondus, on Saturday condemned the postponement of the 2019 general elections by the Independent National Electoral Commission, (INEC).   In a statement his spokesperson, Ike Abonyi, Mr Secondus described the development as a deliberate plot by President Muhammadu Buhari to […] 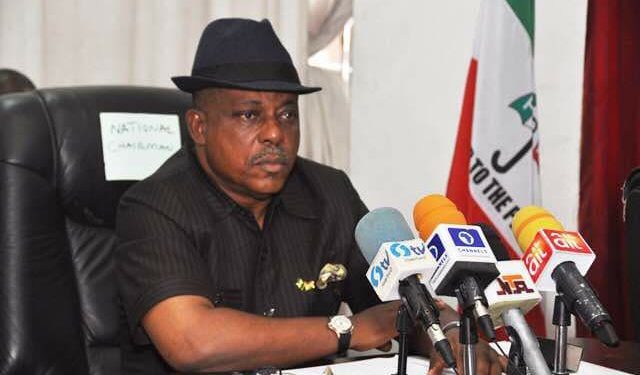