Many people were stunned by his defeat in the 2014 gubernatorial election in Ekiti State. Some could not even figure out why a man who was and still is, an epitome of leadership finesse could be denied a second term by the same people he laboured to serve. While in the saddle, he dispensed with the State’s mean resources in the most austere and pragmatic manner; led the people with open-mindedness, fulfilled most of his promises and venerated the exalted office of the Governor of Ekiti State.

He was loved and appreciated by many for his genial predilection, can-do spirit, and respect for the people, irrespective of political or economic status. This man’s exploits transcended Ekiti State. He deployed his international connections to better the lots of Ekiti State and its people. His performance was in a class of its own with many life-touching innovations. His pioneering efforts in social security for the elderly in the State is legendary. Many of his welfare programmes have been copied with slight modifications by different tiers of government across the country. Despite all these accolades and achievements, he lost his re-election bid to an opposition party in 2014; a misstep which caused another setback for Ekiti people and plunged the State into four years of political wilderness.

Dr. John Kayode Fayemi, the governor of Ekiti State did not just become a phenomenon overnight. Providence has prepared him well for whatever role he has come to play now. Whoever is familiar with his political trajectory would agree that the height he has attained and the roles he has come to play in the entrenchment of democratic governance in the country are not achieved by happenstance.

A leading light of his generation and a pride to Ekiti-Kete, the Social Crusader turned-Politician, is an example of a proverbial cat with nine lives. Fayemi’s earthly sojourn has had the trappings of God in several ways. From his involvement in the June 12 saga of 1993 to pioneering role in guerilla journalism in Nigeria through Radio Kudirat with all the associated life threatening encounters, he became the Executive Governor of Ekiti State on October 16th, 2010. Although he ought to have been sworn-in on May 29th, 2007 having won the election, Fayemi did not assume office until three years later after protracted court adjudications.

From the knowledge of hindsight, one may conclude that God must have deliberately delayed his inauguration for him to be more appreciated because he returned to acclaim to Ekiti in 2010. He is a harbinger of hope. He recorded several quick-wins because the people were already yearning for good governance. He was dubbed “Ilufemiloye” (the Preferred) because of the instant impacts of his programmes and policies on the lives of the people. His giant strides in every sector were unrivalled.

JKF has, over the years, succeeded in igniting light within every dark tunnel that fate brought on his path. In the heat of the June 12 struggle, he was one of the many ‘marked’ men. He took the famous NADECO route and escaped to fight another day. When he left office as Ekiti State Governor in 2014, he was appointed as the Chairman of the Committee that organized the APC Presidential primaries which produced President Muhammadu Buhari as the flagbearer. Thereafter, he was made Minister of Mines and Steel Development. He performed so wonderfully in the Ministry that President Buhari could not hide his love for him and openly confessed that it would be difficult to find his replica. He resigned his appointment as Minister to recontest for gubernatorial seat in Ekiti State.

Ekiti people have tasted two husbands and they know the difference. This necessitated the clamour that Fayemi should kindly come to their rescue for the restoration of values in the State. They yearned and craved for his return to the driving seat to consolidate on some of his developmental agenda for the State in his first term. JKF contested and won the election. True to type, Fayemi has since justified the confidence the people reposed in him and already surpassed their expectations within just four months.

Paradoxically, there are good in evil and evil in good. There is a School of Thought which professes that Fayemi is good at building estate with the bricks, arrows or darts ever thrown at him. His inner strength to bounce back and turn stumbling blocks to stepping stones to greater height is unparalleled. The emergence of JKF for the second term after the break is apt because he enthroned liberty, progress and freedom which are the cardinal tenets of democracy. Fayemi has come to represent the very epitome of the noble ideals of democracy. He has been put on the pedestal as a true democrat and as a practical representation of the ideological construct which the democracy evokes and summarizes in that simple definition: Government of the people, by the people and for the people. Just as the idol represents the finest of God, Fayemi stands as the signifier of that true democracy. He is the practical image, in words and in deeds, of the ideal. Democracy is people centred. It is all about the masses. It is a form of representative government.

He was instrumental to the electoral victory of the All Progressives Congress (APC) candidate, Arakunrin Rotimi Akeredolu (SAN) in Ondo State. He led by example in Ekiti State by returning the Land of Honour to the path of progressive politics through his re-election as the Executive Governor of the State on the 14th of July, 2018. Also, when all hope was almost lost in Osun State, he rose to the occasion by spearheading a political deal with Senator Iyiola Omisore to secure victory for the party in the supplementary election.

He also extended his reach to Oyo State in the bid to effect a last minute damage control to help the APC, but the state was lost to the opposition. Again, he activated his goodwill and network to suppress the lingering intraparty wrangling that had bedeviled the ruling party in Ondo State. He got the job done by enlisting the support of other political bigwigs in the State and that of Arakunrin Akeredolu to douse the entrenched misgivings among the party faithful. His intervention worked magic as the party won majority seat in the State House of Assembly election. His impacts, footprints and signatures are all over the States in the Southwest and his goodwill and infectious human relations resonate beyond political or ethnic affiliation. He is simply a jolly good fellow.

I had my first close encounter with JKF when I was serving at the Federal Civil Service Commission (FCSC) as the Commissioner representing Edo, Ekiti and Ondo States. Though, we were in different Political Parties, he visited my office several times to ensure that Ekiti State was not shortchanged in the Federal Civil Service recruitments. His passion for the development of his people supersedes every other consideration. He broke countless barriers for the development of his people, with his humility and positive dispositions. I am therefore not surprised by his current positive waves.

Fayemi may not be loud; his gentle demeanor may erroneously be misconstrued for timidity by those who have been accustomed to the repugnant nature of his predecessor, he surely knows how to get things done without necessarily being noisy about it. He is busy building successful bridges across the human divides and his unrelenting tentacles continue to stretch across the Niger.

Sat Mar 30 , 2019
The People’s Democratic Party governorship candidate in the  2018 governorship election in Ekiti State, Kolapo Olusola-Eleka, on Friday rejected the judgment of the Court of Appeal in a suit he instituted to challenge the victory of Governor Kayode Fayemi of the All Progressives Congress (APC).   Mr Olusola-Eleka also said […] 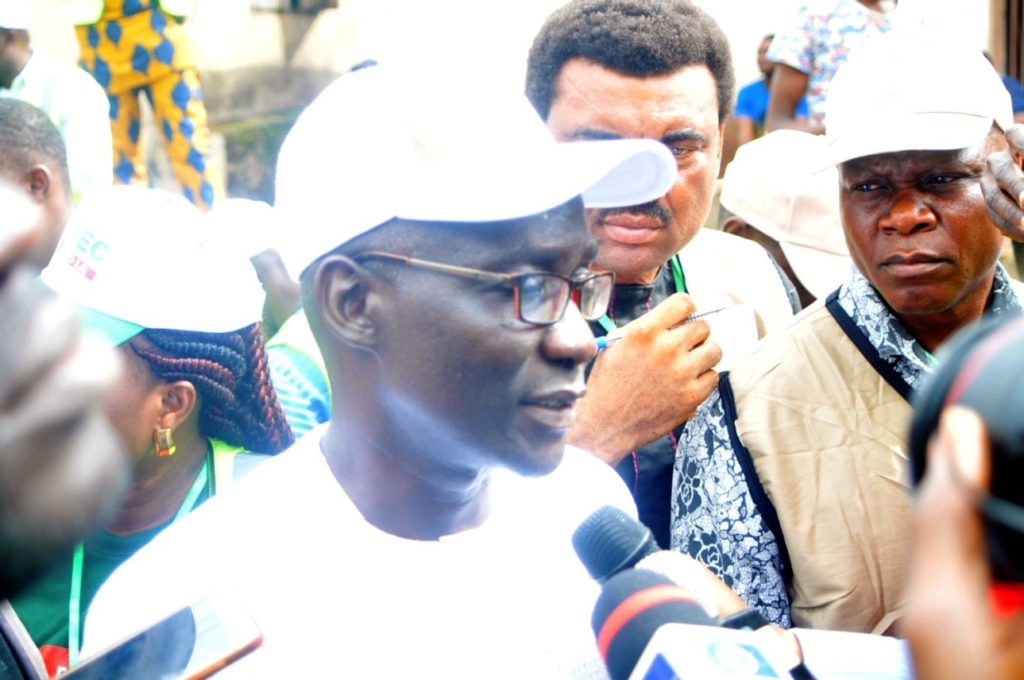