A socio political group known as the Odua Women Advocacy Group has called on Southwest governors to rise up to security challenges facing the region.

According to a communique signed by  Erelu Dupe Martins and Toyin Durojaiye the group’s President and Secretary called on the governors of the Southwest and its environs to quickly orgainise a security summit that will address the Existential threats to the Odua race in Nigeria.

Read full text of the communique below.

OWAG COMMUNIQUE ON EXISTENTIAL THREATS TO THE OODUA RACE IN NIGERIA

A media communique was released on Monday by Oduduwa Women’s Advocacy Group(OWAG):

In line with the aims of the group,as wives,sisters,women of integrity and intellect,business women, professionals and mothers of Oduduwa origin,we will be failing in our God given responsibilities as the fulcrum around which our homes,communities,Oduduwa land and the nation revolves if we do not lend our voices to decry an insidious and existential threat to the Children of Oodua!

We wish to draw the attention of Nigerians and the International Community at large to issues of critical significance,which have far reaching,deleterious implications on the continued existence and survival of the Oodua race in Nigeria.

The spate of wanton killings across Nigeria perpetrated largely by Fulani herdsmen: the only militia in possession of unlicensed sophisticated weapons in Nigeria today without fear of consequence as they seem to have official backing is a serious existential threat to the Nigerian State.

These killings mainly targeted at non-Fulani groups across the country are deliberate in pursuit of an expansionist and conquest agenda.

Unfortunately, the government appears complicit as

no herdsmen caught is ever brought to account for these monumental crimes even after Miyetti Allah has taken responsibility!

Instead, this govt has treated them with kid gloves,justifying their crimes by issuing statements in their defence with the presidency equating Miyetti Allah with Afenifere and Ohanaeze in order to confer legitimacy on them.

The last straw is an insensitive act of impunity – FG decision to fund a Fulani Radio station for the herdsmen in violation of the Federal character element of our constitution.

Protection of lives and property is a basic right of all Nigerians in general and the Children of Oodua in particular as enshrined in the Nigerian Constitution.

This basic right and the sanctity of human life has been grossly undermined, violated and eroded.The spate of dehumanizing rapes,kidnaps and massacres in a concerted,macabre dance of bloodshed,terror and anomie spanning the entirety of Oduduwa land orchestrated and unleashed by rampaging herdsmen is alarming.

The mind boggling reports of the extent of organisation of these miscreants is made scarier by the apparent criminal silence,ignorance and failure of the security agencies and the political leadership at the apex of governance to take a decisive and effective step in nipping this reign of terror in the bud.

There are disconcerting reports of okada riders,who have infiltrated every nook and cranny of Oodua land,fully armed with dangerous weapons concealed in their bikes who serve as informants and lookouts to these terrorists.Few days ago,a viral video showing security agents who discovered dangerous arms hidden in the bike of one of such okada riders was circulated.

A brief recap of few of the heinous crimes perpetrated against the Children of Oduduwa by these murderous terrorists will tell the discerning that there is fire on the mountain:

1.Chief Olu Falae was kidnapped,his farm destroyed TWICE as a warning to him to stop condemning the activities of these terrorists: Ondo state

2.Ondo state is the largest producer of cocoa in Nigeria but in this season of anomie brought opon Oodua land by these marauders,most farmers are abandoning their farms due to attacks and destruction of their farms by these cow herders: Ondo state

3.The recent kidnap and payment of over N5m to secure the release of an OAU lecturer: Osun state

8.Numerous kidnappings/murders in Benin kingdom which necessitated the Oba of Benin,His Royal Highness,Omo n’Oba Nedo Uku Akpolopkolo 2,to invoke curses from the gods of Benin on perpetrators earlier this week.

10.Wives of traditional rulers are kidnapped and raped!

11.Wife of a prominent pastor in Lagos was kidnapped for 2 weeks on her way to Akure and only released after paying N25million!:Lagos/Ondo states

12.Students of Babcock,Covenant and Are Babalola universities are kidnapped and threatened with death and their parents extorted for millions of naira.

13.A woman,a business mogul was kidnapped,threatened and extorted.She has abandoned her business and left the country: Ekiti state

14.A bloody attempt by herdsmen to install a non local traditional ruler in a part of Oke Ogun: Oyo state

15.A woman,a big mogul in the petroleum industry was kidnapped and extorted.

16.Two days ago,one of the Royal father’s from Imeko raised the alarm that a tomato paste manufacturing company owned by Oodua Investment company has been taken over by these criminal herders from where they propose to launch coordinated attacks on his hapless community!: Ogun state

17.Daily reports of farmers maimed and killed,in fact having to pay tax to killer herdsmen before they can access their firms,disgraceful events confirmed by the state governor: Delta state

These reports are just a tip of the iceberg from the daily accounts of the reign of terror perpetrated by these cow herders.

Heartbreakingly,most of the female victims of these cursed kidnappers are both raped and extorted!They are then threatened with death if they speak out.

We deduce that the intent of these criminals is to dehumanise the financially secure and with the rape element,to traumatize and break the spirits of the victims and their families,shaming them into silence cos of the stigma our society associates with rape while they remain free to continue plundering and pillaging our ancestral lands.

For how long will our men,cultural pressure groups,political and religious leaders continue to look on while the head of a proud race is bruised,our men and women dehumanized and traumatised?

This is a clarion call to all true born Yoruba cultural leaders ,political(Oodua state Governors,party leaders) and religious leaders/cultural pressure groups to cooperate ,support and collaborate with Aare Ona Kakanfo of Oduduwa land,Iba Gani Adams,the Generalissimo of the Yoruba security architecture in order to neutralise this common threat to our existence.

There’s an urgent need to realise that Yoruba land is under siege,engage with each other irrespective of party and religious affiliations to ensure that a dynamic,effective and impenetrable security architecture capable of protecting the rights of the Children of Oduduwa to exist on their ancestral lands in put in place.

The conclusion from the foregoing is this:

These terrorists,children of perdition have started implementing a well thought out ,funded,long term plan to subdue and colonise the whole of Oduduwa land in a bid to actualize the goals of their ancestors who were firmly resisted by Moremi,Ogedengbe,Kurumi,Ogunmola and other Yoruba heroines and heros in historical times.

The bitter truth is that ALL of Oduduwa land has been surrounded!Security reports availed by some of our fellow Oodua pressure groups confirm that over 1000 well trained,deadly,armed to the teeth cells of these marauders are already embedded in the forests and bushes of our lands from where they launch their reign of terror!

This is a call that transcends political,religious and cultural afilliations.Our leaders across various divides MUST come together as one,with a singularity of purpose in order to defeat this common threat to our collective existence,otherwise,all is lost.

These murderers understand the psychology and effect of terrorising your victim into submission.Attack the psyche,sense of worth of your victim by dehumanizing him or her with threats,bodily harm,rape or torture :all guaranteed to break his or her spirit.Once this is done,the war is won by default by the terrorist cos the victim loses the will to resist.

Our people are thus enjoined to activate their traditional and communal self-defense systems in the face of these existential threats before it is too late. We are peaceable but no cowards.

We commend former President Olusegun Obasanjo for crediting the wave of terror going on Nigeria by Boko Haram and Miyetti Allah in Nigeria to the Fulanisation project in West Africa. We commend his boldness in speaking an Inconvenient Truth to Power.

We call on the Federal Government to immediately

desist from taking partisan decisions while re-defining law and order so that no citizen would take the life of another without consequences.

Enough of the reign of terror by these criminal herders.Enough of raping and stigmatizing our women into silence.Enough of attempting to break the spirit of our husbands,brothers,sisters and children.

Finally,this is a note of caution to the terroristic herders  and their sponsors  :

The Oduduwa race is a distinguished,cerebral,proud and resourceful one .We will never be broken,subdued or enslaved.

Your ancestors failed in this same evil,selfish quest and you will fail yet again because we will resist with every fibre of our being,with every resource which Eledumare has deposited in us as women and mothers of the nation.

To their greedy,selfish and misguided collaborators among our people who serve or intend to serve as informants to the terrorists:we will invoke curses opon you and your generations yet unborn as is traditionally done by the women of old if you foolishly attempt to mortgage the future existence of your people for a mess of pottage or for pecuniary gain

We are by this communique appealing to ALL State Governors from Lagos,Oyo,Ogun,Ondo,Ekiti,Osun,Edo,Kwara,Kogi and Delta states to as a matter of urgency invite and sit down with the Generalissimo of the Yoruba Defence/Security Architecture,the Aare Ona Kakanfo of Yoruba land in the person of Iba Gani Adams to discuss and agree on effective strategies to enable the protection of Odualand.

Expecting the Aare to jump into the fray without a clear mandate from our Governors is neither a realistic nor wise expectation.

There’s a definitive need for our Governors to authorise and support his intervention,otherwise,the govt at the centre will capitalise on this lack of a clear mandate to emasculate the Aare Ona Kakanfo by proscribing all security outfits affiliated to him just like it happened in the case of IPOB.Wisdom is profitable to direct.

Sun Jun 23 , 2019
By Odeh Henry   Adams Oshiomhole, the national chairman of the All Progressives Congress (APC) has called on the Inspector General of Police Mohammed Adamu to seal off Bauchi State House of Assembly over the emergence of two factional Speakers on the floor of the House. Oshiomhole while addressing APC […] 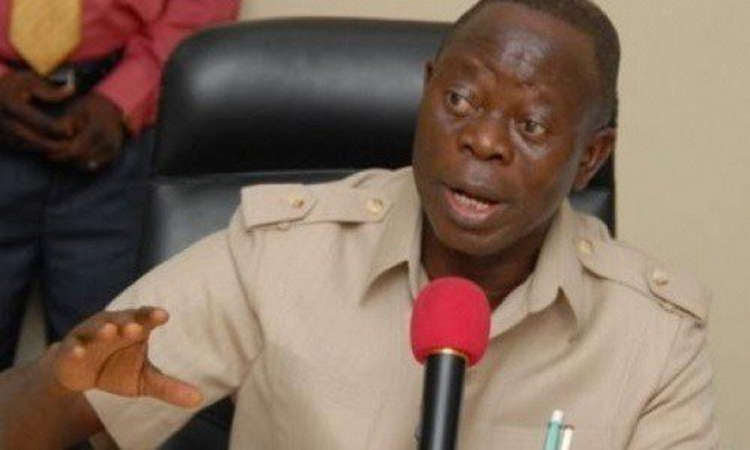