The Union Of Tippers And Quarry Employers Of Nigeria (UTQEN) Oyo state chapter, under the leadership of its state chairman, Mr. Wasiu Adewale popularly called Oluaye, has led state executive members of the union to evacuate heaps of refuse that has long littered Ojoo Iwo road area of Ibadan during last Saturday’s sanitation exercise that took place across the state.

Mr. Adewale who spoke with Sunrise Bulletin correspondent in a phone conversation after completion of the sanitation exercise stated that UTQEN in Oyo state is fully in support of governor Mankind’s approach to sanitation in the state because it is for the ultimate good of the people not for the governor adding that no sane person or true born of Ibadanland would oppose or antagonize policies that are aimed at creating a more healthy and neat environment for the purpose of a healthy living.

The chairman of Oyo State Environmental Task Force Committee and Special Adviser to the executive governor on Security matters, retired Commissioner of Police, Mr Fatai Owoseni, while monitoring the evacuation of heaps of refuse on the Ojoo-Iwo road express way organised by Oyo state chapter of UTQEN reportedly commended the union for its responsiveness to the exercise urging others to emulate it for a better society.

Mr. Owoseni reportedly said “I appreciate the Union, which joined us in this mission, donating their trucks freely for us to work today and for bringing out their members for this exercise.

“I also will appeal to the good people of this State to desist from dropping refuse just anywhere anyhow. The median along the road is not the proper place to drop refuse. Everybody in the neighborhood should key into getting contractors, the PSP’s to pick their refuse. This has been the practice but people stopped it at a certain period of time. So, they should support the initiative of the State Government to make Oyo State clean, especially Ibadan.”

Owoseni noted that over 20 trucks were brought out by the Union to rid the axis of refuse and filth, saying: “It is a good initiative that we have seen an organised body supporting the efforts of Governor Makinde. They brought out about 20 trucks this morning with their members to join us in this process. If we have people buying into government’s efforts like this, we will get everything cleared in no time.

“The most challenging thing is the buy-in of our people. We have been doing a lot of enlightenment. We met with different market leaders to sensitise them and let them know that everybody must join the state in getting rid of this refuse and sustaining the effort.

“We are also advising the people on the need to adopt the system that has been in place; using the contractors and PSP but it has been a herculean task.”

He charged the people of the State to desist from indiscriminate dumping of refuse on the medians and roads, urging them to embrace the culture of waste-bagging, which he said would play a significant role in eliminating the challenge of indiscriminate waste dumping in the State.

Owoseni maintained that the Governor Seyi Makinde-led administration had Zero Tolerance for indiscriminate dumping of refuse in the state, stating that it was already making progress in the area of refuse disposal and management.

“To change the mind of the people is a very difficult thing. In all of these, we are making progress, it is just matter of time and I believe that the good people of Oyo State will appreciate what this administration is doing on solid waste disposal.

“We want to see how it works in this emergency period and, of course, the Governor has set a template that will solve the issue of waste disposal permanently in Oyo State.

“So, by the time emergency period elapses, we would have gotten a workable template where respective MDAs that are supposed to do their work will be able to do it and sustain it,” he said.

In his remark, the Chairman of UTQEN, Mr. Wasiu Adewale, said that the clean-up exercise organized by his association was meant to support the State Government in making Ibadan cleaner and safer.

He said the association was impressed by the way the Governor Makinde-led administration was handling the issue of environmental sanitation.

Tue Dec 10 , 2019
The Speaker of the Oyo State House of Assembly, Rt. Hon. Adebo Ogundoyin has charged legal practitioners and the entire Nigerian judiciary to ensure that rule of law reigns supreme over all forms of self-interest in the country. Speaking at the Nigerian Bar Association, NBA Ibadan Branch 65th Anniversary, […] 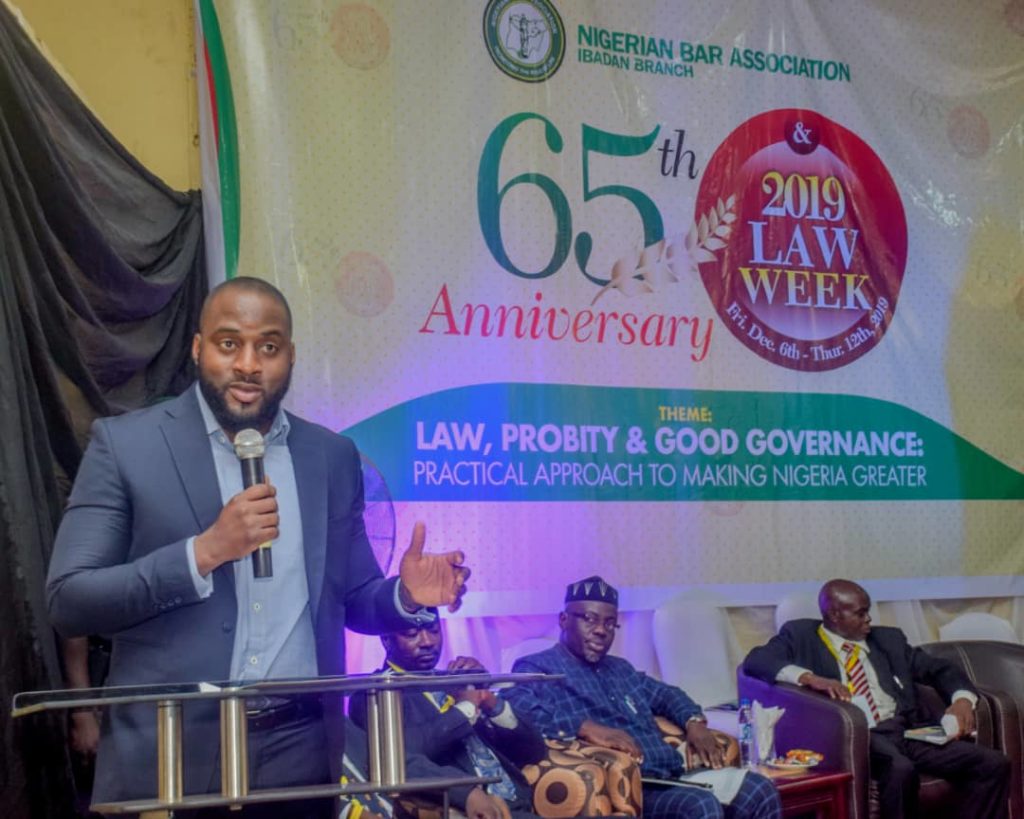