A socio-political group of elites of Ekiti State origin, Ekiti Democrats Agenda (EDA) with members that spread across different professions and political divide took a tour of Ekiti State, to assess and appraise the performance of the John Kayode Fayemi led administration.

Members who travelled from far and near, converged on Ado Ekiti before embarking on the weeklong assessment tour that took them to every local government in Ekiti State within the last week of July, 2020.

Recall that Promasidor Nigeria Limited has effectively taken over Ikun Dairy Farm to enhance the maximization of its full potential and has since commenced production. The dairy farm will, when in full capacity, produce 10,000 litres of milk per day. Ekiti State Pavilion that was initiated and built by Fayemi in his first term but abandoned by his predecessor has been rehabilitated. The Civic Centre at Fajuyi is another laudable project of Fayemi that was earlier abandoned. The building was built to 50% completion before Fayemi left in 2014 but was also abandoned by the previous administration. The project is now 95% completed.

The Oja-oba Ultra-modern market was initiated by the immediate past administration, but in his usual characteristic ways of viewing things, Fayemi is conscious of the fact that the project was built with the taxpayers’ money of Ekiti-kete. Therefore, he picked up the project from where the previous administration stopped, unlike what the previous government did to all his laudable projects. The project was 50% completion when Fayemi took over but it is now 90% completed.

The fencing of the Agro Cargo Airport is almost completed despite the economic reality of the COVID-19 era. The team of EDA was also pleased and surprised by the numbers of construction and renovation works ongoing in various schools across Ekiti State. In his usual way of spreading development evenly, Governor Fayemi is repeating what he did in his first term in office. There is no town in Ekiti State that doesn’t have at least a school construction or renovation project underway. All of these are things of pride for which Ekiti Democrats Agenda commends and celebrates Governor John Kayode Fayemi.

While thanking God for the quick recovery of Governor John Kayode Fayemi from COVID-19, Dr. Eniola Fadipe who spoke on behalf of the group, showered encomium on the Governor for a job well done and prayed for more strength, wisdom and enablement to enable him complete all the laudable and developmental projects he started. A vote of confident was passed on Governor Fayemi by all members of Ekiti Democrats Agenda (EDA).

EDA rounded-off the tour on a joyful note, but not without expressing great fear and concern for continuity of the developmental strides of Fayemi. EDA is proud of what Fayemi is doing, but at the same time scared of the repeat of what happened in 2014 when many laudable and economically viable projects were abandoned for political reasons and lack of foresight. Ekiti must not be allowed to slide backward again. Forward ever!

Mon Aug 10 , 2020
Petroleum Tanker Drivers in Lagos State have withdrawn their services as directed by the Nigeria Union of Petroleum and Natural Gas Workers (NUPENG) beginning from Aug. 10. The state Chairman, NUPENG, Mr Tayo Aboyeji made the confirmation on Monday in Lagos. Aboyeji said that the strike began in the early […] 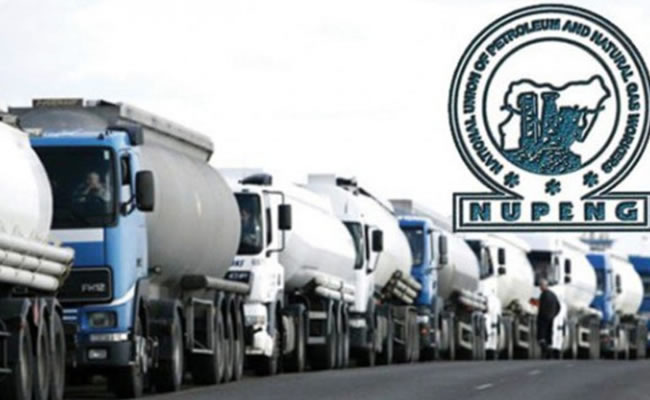