In a letter dated Friday, August 14, Head of Service, Anthony Okungbowa said: “The Edo state government has approved all outstanding promotions in the state public service.

“Ministries, Departments and Agencies (MDAs) are by this announcement directed to commence the process of the promotion exercise of eligible officers without delay.

“All accounting officers are to, with immediate effect ensure strict compliance with this directive.” Gov Obaseki has approved all outstanding promotions in Edo state public service.

The governor who recently completed the John Odigie-Oyegun public service training centre, located at Okada Avenue, GRA, Benin city reaffirmed his commitment to the welfare and betterment of Edo people.

Sunrisebulletin.com gathered that the Edo state public service training academy has a training facility to accommodate 1,000 people at a time. “We will have 25 to 28 training rooms where civil servants will be trained.

No civil servant will be promoted or receive increment without attending at least one training,” Governor Obaseki said concerning the training centre.

“My administration is committed to the welfare of Edo people and with the public service training academy, workers would soon get regular training to enhance their productivity,” he added In July 2018, Governor Obaseki honoured 23 civil servants for diligence, announced an automatic promotion for them, and awarded them N500,000 each.

In May 2019, Governor Obaseki swore-in 14 new permanent secretaries into the state’s public service charging them to adhere to ongoing reforms in seamless service delivery.

In November 2019, the Chartered Institute of Personnel Management of Nigeria presented an Award of Recognition to Governor Obaseki for his “contribution to human capital development.”

The CIPM also secured the approval of Governor Obaseki for collaboration that will ensure the professionalization of Edo civil and public service, as well as capacity development for all staff cadre in the state public service.

In July this year, the Edo government reportedly paid the sum of N81,169,724.24 to families of 34 deceased employees of the state public service who are enrollees of the contributory pension scheme.

Governor Obaseki had earlier vowed to sustain the tempo of developmental strides by his administration across all sectors “despite distractions by a few selfish politicians who are hellbent on further plundering the fortunes of the state.”

The governor who spoke while addressing his party supporters in wards 5 and 9, Etsako East local government area on Thursday, August 6, said his government will continue to utilise the state’s resources for developmental projects in order improve the livelihood of the majority of Edo people.

Just In: Messi Threatens To Quit Barcelona After Bayern's 8–2 Thrashing

Sat Aug 15 , 2020
By Henry Lionel Messi was visibly furious with the Barcelona management and latest reports have it that the Argentine has threatened to quit the Catalan club in 2021. The Sun are reporting that Messi, whose contract lapses in the summer of 2021, has told the club board to restructure the […] 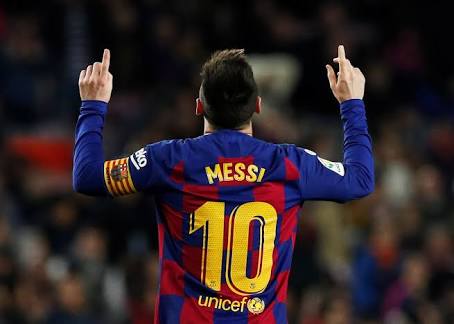