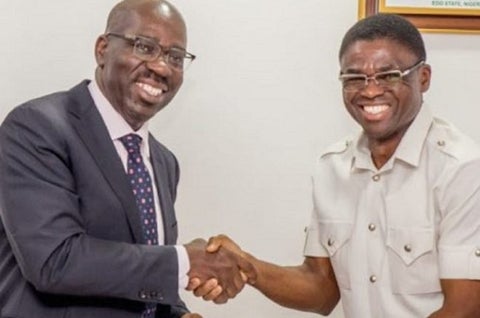 Chairman of Edo state chapter of the All Progressives Congress (APC) Anselm Ojezua has explained that the defeat suffered by the party in the just concluded governorship election in the state can be partly blamed on Adams Oshiomhole and the national organ of the party.

Ojezua made this known on Sunday while reacting to the victory of Godwin Obaseki of the Peoples Democratic Party (PDP) in the just concluded Edo governorship election.

According to reports, the state APC chairman said he received the news of Obaseki win with mixed feelings.

He lamented that he was saddened by the fact that Obaseki didn’t win the election on the platform of the APC.

The politician noted that the governor could have won the election on the platform of the APC if Adams Oshiomhole did not unwholesomely pushed him out of the party.

He stated that Edo APC had already reached a consensus to support Obaseki as the candidate of the party before he was disqualified from contesting on the party’s platform.

He said: “At a time I did make a statement that our most treasured asset is the governor.

“That statement has been vindicated by the victory the governor has secured,” Ojezua said.

The state chairman stated further that the national organ of APC championed the Osagie Ize-Iyamu campaign without the state chapter of the party.

“They treated the party with contempt and unfortunately the national organ of the party cooperated with them in this negligence believing that they could secure victory without the platform.

So, we were just there looking at them. I think we are all wiser now,” he concluded.