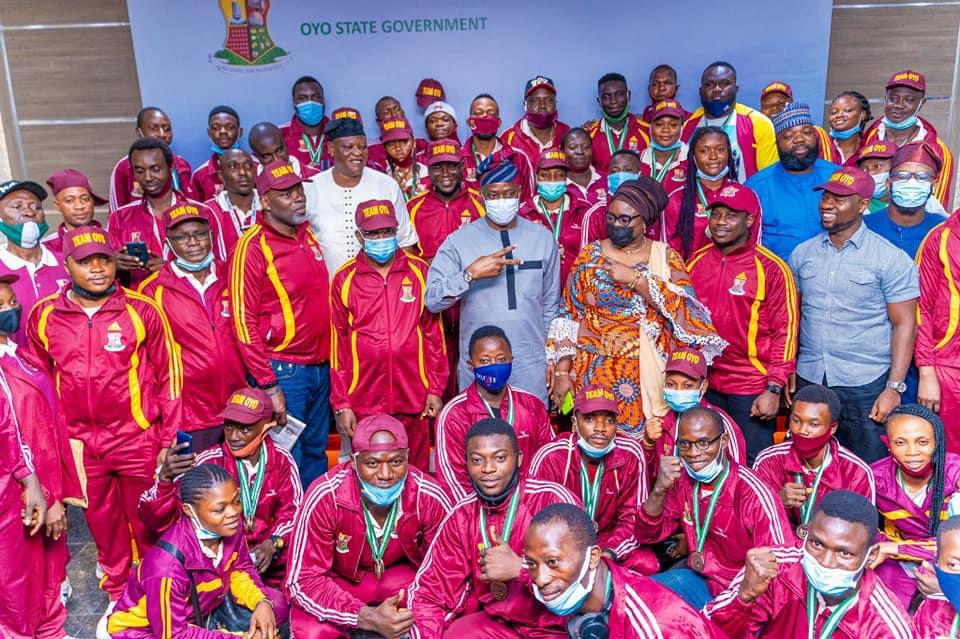 The Governor of Oyo state, Engr Seyi Makinde has said that his administration will continue to place high premium on sports development as a strategic means of productively engaging youths of the state and has announced payments of N500,000 (five hundred thousand naira) to each gold medalists from the Edo 2021 National Sports Festival, as a moral booster.

Makinde who directed concerned office to effect immediate payment of all allowances acruing to the athletes and medalists also said that the same style of pattern where Usain Bolt made history that is being Installed at the Lekan Salami Stadium.

The Governor, who made this pronouncement while hosting the athletic team that represented Oyo state at the just concluded National Sports Festival, Edo 2021, at the Governor’s executive chambers, Secretariat Ibadan, on Wednesday 21st of April, also extended the gifts to all coaches in each sporting category with the sum of N500,000 each.

“I welcome our athletes, our fighters, from Edo state. I should have been in the same tracksuit with you myself but because of the performance at the Edo 2021, they are forgiven.

“When the Honourable Commissioner for Youths and Sports was making his remark, he said Lagos state went with over one thousand contingents and came back with one gold medal more than us that went with 230.

“I want to say congratulations to our medalists. This government has been committing a lot of resources towards sports development in Oyo state, apart from Adamasingba Lekan Salami stadium that is undergoing serious upgrade right now, because the same type of pettern where Usain Bolt made history is the same one that is being installed at the Lekan Salami stadium.

“So, in the years to come I believe we will also produce our own world record holders in Oyo state.

Governor Makinde also commended the athletes and coaching crew for making the state at the just concluded event.

“I am glad with the results and I want to commend the athletes and the coaches for making Oyo state proud for a job well done.

“This government will continue to encourage sports development even at the grassroots level that’s why across the geopolitical zones of Oyo state, we are upgrading our sport facilities so, we should start seeing results of that investments.

“I am sure we will see instant result at the next National Sports Festival which is scheduled to take place next year.

Well, we felt states are trying to poach you, you don’t need to go because Oyo state will definitely provide the required atmosphere for you to excel.

While speaking on a lighter note, Governor Makinde expressed his satisfaction at he performance and conduct of the team Oyo Athletes at the National Sport event, adding that he will personally soon be hosting Lawn Tennis medalists at the State Government House to test their skills at the Tennis court. 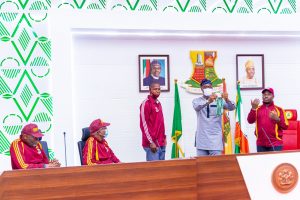 “And for some of you, especially the tennis medalists, for me to believe your medals you have to beat me on the tennis court. So, I am going to be organizing to match up with yourselves so don’t rest yet.

“And the medalists on ‘ayo olopon’, actually I need to invite you to my house this weekend, I have one and I have beaten everybody who come to my house so, come and show me how you won the medals and if I beat you I am going to the next National Sports Festival.

“Because we do have a process, if I promise you I want to do something, I should start by you know, the request, the first approval, more work, the next approval and then the final approval so, none of that were done eventually.

“But we picked it up and within the limited resources that was available to us we fulfilled at least a percentage of those promises that were made and I believe that even for this particular event, we encouraged the Oyo State Sports Council to give something to the medalists instantly as soon as they confirm you a medalist and I saw pictures of that.

“Well, with the clapping it shows that it was actually done. We have made provisions for all your allowances, if they have not been paid it’s probably pending with the Accountant General.

“Well, for us to show appreciation for our medalists and the coaches, we won’t promise you what we won’t be able to do, I will make some pronouncements now and it has to be done within the next two weeks maximum.

“And for the coaches irrespective of the medal won, we give each coach five hundred thousand naira. And to our only gold medalist, who competed in I believe it is Shotput, that’s Clifford Oriza, because we want to encourage athletes in that category, we will give one million naira extra to him.

“And also parapower lifting we will give additional one million naira too. And I have listened to the requests put forward, we will definitely look at it, one assurance that I can give to you is that Oyo state will continue to encourage its own athletes to even do more.

“I’ve set a target of at least one hundred gold medals for the next sports festival and everything that will help in realizing that vision, we will definitely put in place.” Governor Makinde concludes. 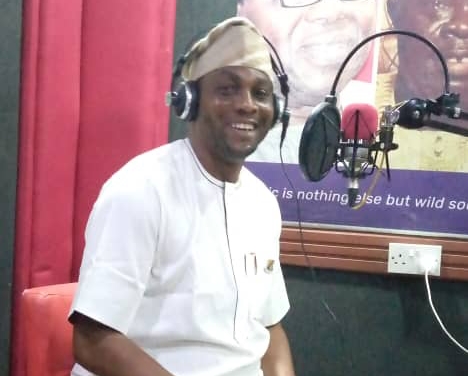